Current shunt resistors are low resistance precision resistors used to measure AC or DC electrical currents by the voltage drop those currents create across the resistance. Sometimes called an ammeter shunt, it is a type of current sensor. 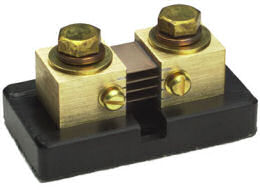 Other ammeters use an external DC current shunt (e.g., see photo), but the principal of measurement remains the same.

So by inserting a current shunt into a circuit whose current you want to measure your can find the current by measuring the voltage drop across the shunt. Then knowing the resistance of the current shunt you can calculate the current using Ohm's law arranged as I = V ÷ R.

A perfect precision current shunt has exactly the resistance claimed. That resistance doesn't change with temperature, age or current. It's inductance (resistance to AC current change) is zero. Precision calibrated current shunts approach those ideals, but are large and very expensive.

Output Voltage which indicates the resistance as the voltage produced for the rated current. V = I × R. For example an output rating of 50 mV at 100 Amps which implies 0.0005 Ohms (0.5 mOhms) resistance.

Resistance Accuracy, for example their actual resistance is within ± 0.25% of the claimed value,

Resistance Drift, for example the shunt's resistance changes less than 0.002% (or 20 ppm = parts per million) per °C of temperature change.

Power Rating/Derating. Because current shunts are resistors and dissipate heat from the current flowing through them, they get hot. Since that heat can change their resistance and even permanently damage the shunt, current shunts are often given a power rating or a derating factor. The heat produced is power measured in Watts (W)

This says the heat produced increases with the "square" of the current. So doubling the current increases the heat power dissipated by 2² = 2 × 2 = 4 times. So small changes in current produce big changed in heating. Dealing with this heating gets complicated fast. In practice current shunts are often rated to be used continuously at only 66% of their "rated current". So if you need a continuous 80 Amp measurement you can't do it wth a typical 100 Amp ( thus 66 A continuous) rated current shunt. Alternately, a shunt may have a graph that shows how you derate its continuous current as a function of the surrounding air temperature. You might find you can use it at full current if it's 0 °C around the shunt, but at only 40% of full rating with a 90 °C ambient temperature.